From the Founder's Desk

The primary reason for Tamils relocating to South Africa (as early as the 1860’s) was the hope of earning and living a better life. Sure they were misled and instead lived and earned near slave like conditions. But despite the hardships, the South African Tamil People have risen to be very successful citizens of this country.
Be it agriculture, science, medical, legal, trade, manufacturing, administration, craftsmanship or whatever sector we serve, we do it with diligence. We hold leading positions of almost all institutes, departments, organisations and/or businesses in this country, including the state.
The same goes for Tamils across the Diaspora. Tamils were displaced over centuries to various countries across all corners of the world, to work in sugar plantations, rubber plantations, tea plantations and so forth. Today there are about 7,5million Tamils living in countries outside of India. And despite experiencing the same slave like conditions, today our Tamil People across the Diaspora are very successful.
We need to feel proud that Tamil is the oldest known language and culture to be traced. With one of the oldest traceable literatures known to mankind. And amazingly enough, it is still one of the most spoken languages in the world. Tamil enjoys national status in Singapore and Sri Lanka, and official status in so many other countries. Tamil also has one of the largest fonts on the Mauritian Currency.
In South Africa, we need to dispose of the thought that Tamil is the language for doing “sami” (prayer). Its goes deeper than language, culture or religion. Tamil is also an ethical conduct by which we earn, live and persevere in our business. This is nicely reinforced in Chapter 9 of the Thirukkural, that even before 200BC, Tamil publications encouraged good business ethics.
Globally there are Tamil Chambers of Commerce in so many countries, like Australia, Canada, Britain, Mauritius, Sri Lanka, Malaysia, India, Singapore and so forth. It would be wise for us to have this global connectivity.
Locally in South Africa, so many minority languages already have established Chambers of Commerce. Such as the French, Greek, Italian, German communities in South Africa. If that be the case, then shouldn’t we as Tamils have our own Chamber of Commerce?
The last few years have been quiet critical for us as South African’s. We experienced one of the longest strikes in the history of South Africa in 2014 and then downgrades by rating agencies in 2017. The future of business in South Africa is going to be quite different.
The Tamil Chamber of Commerce offers a good platform to contribute meaningfully to South Africa. 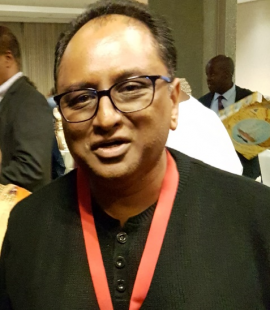